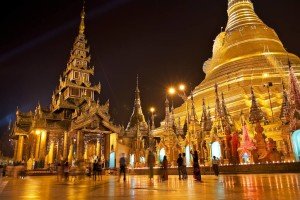 “Everyday, day and night, day and night, I am thinking this – only this,” says a leading evangelist in Myanmar, concerning his mission to evangelize to his fellow countrymen.  Although we are not giving his real name for the sake of his safety and his family’s safety, Jonah plays a key role in developing effective evangelistic tools and strategies to reach this Buddhist nation.

“Every Buddhist wants to worship the true god, but they don’t know what Gautama taught to his followers.  They don’t know how to worship the true god,” Jonah explains of Theravada Buddhists.  Those who elevated Prince Siddhartha (Gautama) the seeker to the position of “Buddha” – the position of “god,” failed to grasp Gautama’s true message.  “No, Gautama is not Buddha.  Gautama himself sought the Buddha,”   Jonah believes that the key to Buddhist evangelism is leading one to question who the “true Buddha”- the “true God” – really is.

During the early years of his ministry, Jonah recalls going 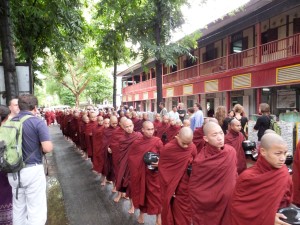 village to village talking with the pagoda elders and the head of Buddhist monasteries.   “Do you hate Christians?”  he asked.  They said no; they said Christians were good.  To this, Jonah replied that he was a Christian and asked if he could tell them about Christ.  No!  The answer was clear:  “Christ is Western God, Christianity is Western religion…”

However, when Jonah asked his next question: “Shall we discuss about the true Buddha?”  The resounding answer was ‘yes!’  Everyone at one such monastery was interested and many accepted Christ that day.  Even the monastery head was convinced.  “If you believe that Jesus Christ is the true Buddha, should I pray for you?” Jonah offered.  They all requested prayer.

Jonah began his evangelism work in the early 1990s.  “I just shared what I knew,” he says in a simple, matter-of-fact way.  At the time, he began his studies at a Bible college near Yangon.

As he could, he rode his bicycle to surrounding villages and evangelized.  But it was slow going.   Jonah  wanted new ways to reach more people more effectively.  “Oh Lord, the way I’m evangelizing is impossible to influence this country,”  he cried out.  Quietly, in his heart, Jonah prayed for a way to evangelize more than 10,000 times what he was currently capable of with what he had.  And some years later the Lord opened a door for Jonah to partner with a missions organization where he had full access to the creation of the evangelism materials that would indeed reach 10,000 times the eyes and ears of his previous ministry.  Now more than 100 projects are complete.  Most are evangelism tools in the Myanmar language, while others involve the testimonies and gospel songs for 29 ethnic languages within Myanmar.

“That is the most effective way to spread the Gospel. Through this work, God will transform people.  If people truly hear the truth of the Gospel, the Holy Spirit will work in their lives.   If Myanmar will transform, then other Buddhist nations will see what the true God has done in Myanmar,”