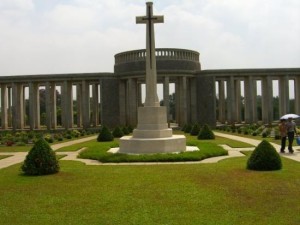 Our first clinic day!  On the way, our team stopped at the World War II cemetery on our way to our first medical clinic at Hope Children’s Home.   It is hard to fathom that 26,000 allied soldiers are buried there, losing their lives in the war against Japan.    This is such a memorable place to visit, We took time to explore and take some photos.  I kept wondering about the moms and dads, wives and children and the impact that must have been.

On to Hope Children’s Home.   We were warmly greeted by a score of the kids holding flowers and giving the Burmese salutation “Minglabar”.   That was touching.   Patients began to filter in after we set up our pharmacy and stations of service.  Most of our stations were under trees.  About every hour we moved to catch the most shade.   Ninety degrees sitting in the sun is a bit warm.

Josiah’s wife Phoebe prepared a grand lunch for us with typical Burmese foods.  We all enjoyed that.  Since this was Saturday, there were young girls who helped.  I watched 5 or 6 of them cutting up vegetables.  As we have come to expect, the food was delicious. 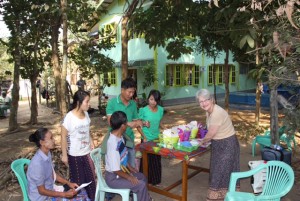 We treated 79 people for the day, dispensed 37 pairs of glasses and wrote around 300 prescriptions.   Fifty people said they want to accept Jesus as their Lord.

Josiah gave us a tour of the children’s home.  He asked Joana Jones from Indiana to help start an orphanage in 2008.  Cyclone Nargis hit the country in 2008.   It is estimated over 120,000 people died.  This left thousands of orphans.   Joana is retired from General Motors and was serving as youth minister in Monroe County Indiana at the time.  She had felt called to help people in Myanmar.   The Lord brought Josiah and Joana together.  The home began just with temporary shelters and has developed into a wonderful venue for ministry. We toured the new girls’ dorm addition that Sherwood Oaks Christian Church funded.  It is very nice. 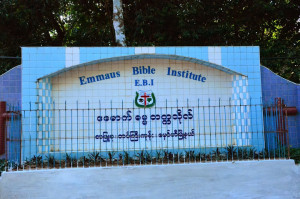 Joshua Leme, the president of Emmaus Bible Institute (just across the street from Hope) helped in interpretation.  He is a graduate of Cincinnati Christian Seminary and is from the Lisu ethnic group.   He gave us a tour of the campus after our clinics.  While we were there we met some pastors who have come for our pastor’s conference starting Monday.  Two had travelled three days to get here. Another had walked a long time so he could attend.   What an exciting beginning!

So much of the Christian Church’s outreach in Burma started with the humble ministry of Gertrude and J. Russell Morse 90 years ago.  Their grandson Mark Morse told me that as a result of the growth and outreach of these ministries, one million people have come to Jesus and seven Bible Colleges are prospering in Myanmar.   Someone once said, “It remains to be seen what God will do with a man who gives himself up wholly to Him.”  I can say that I have, through the amazing legacy of the Morse family.

Our team shared many stories:

These are exciting, God-filled times.