By Doug and Linda Pettit

Mae Mar Sha is in her 80’s.  And she just loves missionaries.

We met Mae Mar Sha, and three other members of her family at a nice restaurant in Myitkyina.   It 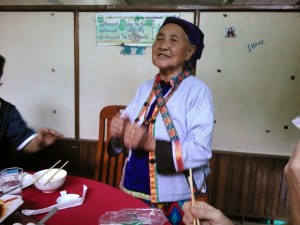 was our understanding that they wanted to tell us about their successful amber business.  But…that subject never came up.  Instead she told us her story..

Her husband was Rev.Nathanael Wood, a Lisu  pastor.

Mae Mar Sha and Nathaniel first heard the Gospel message as children from American missionary, Rev. Allan W. Crane, of the China Inland Mission.  In time, Nathaniel became a minister and he and Mae Mar Sha married.  They had 11 children, some born in China, some in Myanmar.  Seven children are still living.

Nathaniel and Mae Mar She were pastoring in China near the Myanmar border in 1958, a year of uprising from the Mao Communists, who eventually overtook the country.  It was a dangerous time for Christians.

The family was seriously praying and seeking God for what they should do, as they were hearing reports that Christians were being killed — especially church leaders within.  Following the example of drawing lots found in Acts 1:26, the wrote on several pieces of paper “yes” or “no.”  A “Yes” lot meant that they were to stay in China.  “No” met they should flee to neighboring Myanmar.  They put the pieces in a container and drew one piece of paper out.  It was “yes”, so they prepared to leave for Myanmar immediately.

Five days later the Communists arrived in their village.  They believe they surely would have been killed had they stayed.

Nathaniel continued correspondence with his two mentors, Rev. Allan Crane and another missionary Rev. Allyn B. Cooke and his wife, Leila. All three of these are deceased.  Rev. Cooke remarried, and it is believed she is still alive, but her name is not known.  Cooke had 3 children with 1st wife Leila : John, Leila, Grace and it is not known if they are still living.

Crane and Cooke were both affiliated with the China Inland Missionary group and Overseas Mission Fellowship (OMF), including books sent by Nathaniel to them.  It is the desire of Mae Mar Sha to connect with any members of these missionary’s family.

This contact is extremely important to them.  They deeply appreciate the sacrifice these missionaries made to bring the Gospel to them, and to continue to be mentors.  This family is so thankful for Rev. Crane coming to their area in China to share the gospel. They realize it is because of his witness is why they are Christians, along with most of their current extended family of fifty plus.

The mother is a SAINT and so sweet. She learned many Gospel children’s songs as a child and she wanted to share them with us. She stood right up in the restaurant and sang about 5 songs, so touching. She prayed for us and we so appreciated it.

Linda was admiring a purse she makes. She is still active enough to make purses and sew clothing to sale. She said she was going to give Linda one of her beautiful handcrafted Lisu purses! She sent the purse to us, it will be a treasured gift of this precious family’s story.